Our premium parking fantasy blew up the moment we realized that $20 only gets you into one of the “satellite” lots far, far away from the Hard Rock stadium. Little did we know that the long walk in would pale in comparison to the long walk out.

We were in Miami on Friday to watch UVA get spanked by the Hurricanes. The game itself was a pretty boring, lopsided affair but the atmosphere was well, interesting. Clearly the fans have embraced the ‘tough neighborhood’ theme..lots of big ‘gold’ chains with Miami’s area code hanging off of them.  It was quite something and the music was.. well, I’m pretty sure I’m still vibrating.

But never mind all that, because the main event of the evening didn’t unfold until we left the stadium to find our car.

Let me just say this-

It’s one thing to lose track of your car in front of Macys, quite another at a stadium that seats over 65,000 people. 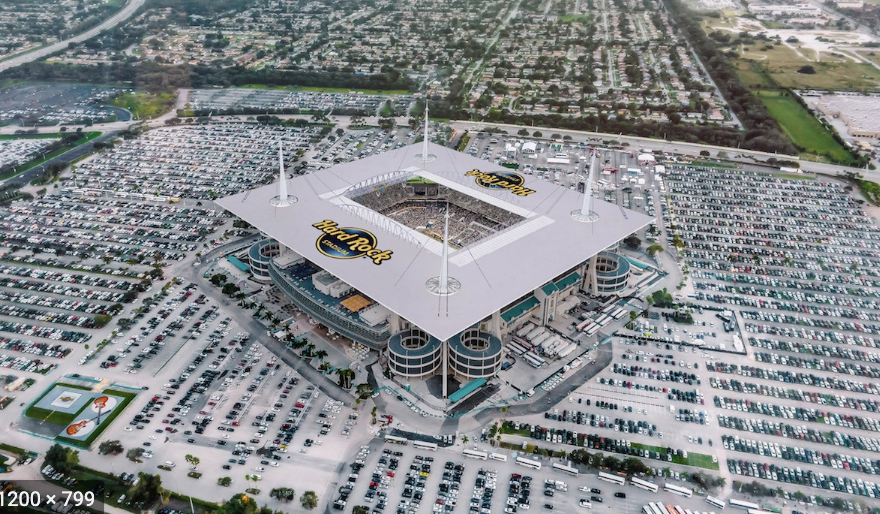 And by the way-

Our car was not in the parking area you see in the photo above..heck no, that would have been easy! We were in the airport equivalent of long term parking without the usual shuttle buses, absolutely NO idea which side of the stadium we were nearest to and NO SIGNAGE for guidance whatsoever.

To make matters oh..oh.. so much worse, there were barricades everywhere that turned the parking area immediately surrounding the stadium into the equivalent of a corn maze. We would head in one direction, hit a blockade and have to go all the way back to the stadium and pick a new direction. It was like walking down the leg of an octopus.. arriving at a dead-end at the  tip and having to trudge all the way back to the octopus’ head to pick out a brand new leg.

I thought we were going to die..not from thirst or being mugged, but I thought my husband and I were going to choke each other as we kept disagreeing about which way to go..Yes, it would have been one of those ugly scenes.

What am I saying?  It was an ugly scene!

But we did find the car..obviously.. as I’m sitting here typing and not dead. And my husband and I are talking again, so all is well with the world.