I haven’t been to an IKEA in years so I was super excited to discover that there’s one in this area.  But as I walked through its sliding front doors yesterday morning and stepped onto the escalator going up, a strong sense of foreboding welled up in me..

“Hmmm, where’s the escalator going down?”

I followed the winding path that leads customers through a series of intriguing vignettes;  kitchens, living rooms, kid’s play areas, office spaces…  It was so cool, it was so fresh, it was so sleek, it was so bright, it was so euro-sheek..how do you get out of here?

After about ten minutes of wandering down the twisting blue path,  I found myself becoming more interested in potential exits than potential awesome ideas for our new little town home. For real, what if there was a fire?  There’s a Sherwood Forest’s worth of pressed wood in that place just waiting to burst into flames!

As I tried to tamp down my “fight or flight” response with a time-out in a burnt orange FRIHETEN sofa ($599), it hit me that I had actually had this exact feeling once before, the last time I was at Disney World stuck in one of those “It’s a small world” boats. 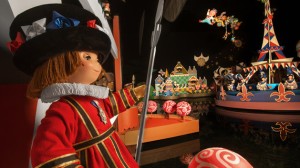 Seriously, enduring that never-ending ride is like standing in a pew singing a church hymn with 78 verses (all of them the same..) I mean if it’s really such a small, small world, why is that ride so very, very long? And just as an aside, how often do they throw chlorine into that water? Shouldn’t they post that information somewhere? Floating through the last scene where all those wooden little people are jerking around and singing away in their matching white outfits, I was about thirty seconds shy of a full blown panic attack..

Which is how I started feeling as I rounded the corner into a sea of pillows, sheets and SMÖRBOLL duvet cover sets.

How big IS this place? 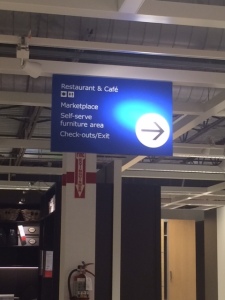 By the time I got to lighting, clocks and wrapping paper,  I was employing transition-stage Lamaze breathing techniques. IKEA could have had a display of free polyester wall art in front of me at that point and I wouldn’t have cared, I was so fixated on “the path” and the little arrows leading me out of that seemingly interminable maze of Scandinavian  hipness. 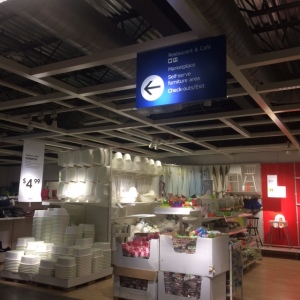 And then I smelled it…cinnamon!

I knew the end was nigh. 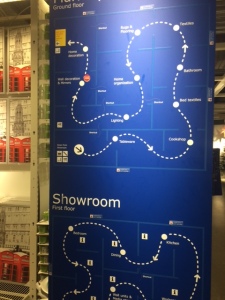 I took a left and entered the cavernous room where you pick up what you picked out.

All I picked up was my pace.. snatching one of their catalogs as I sprinted through the cash register gauntlet,  burst out the door and ran into the blindingly sunny parking lot…

I took a deep, slow cleansing breath and smiled…

And thank the good Lord for internet shopping!